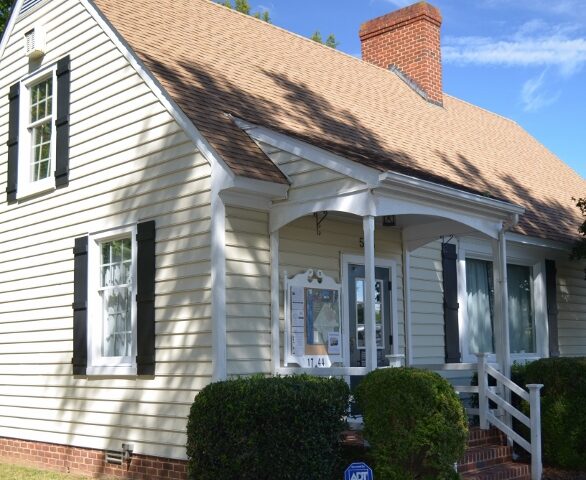 Historic Port Royal, Inc. a 501(c)(3) organization founded in 1995, invests in Port Royal by restoring structures, operating museums, and keeping alive the town’s legacy and rich history. Settled in 1652, the area was first inhabited by the Algonquian Tribe of Native Americans. The town was chartered in 1744 around Roy’s Tobacco Warehouse and soon became an important center of commerce and trade. 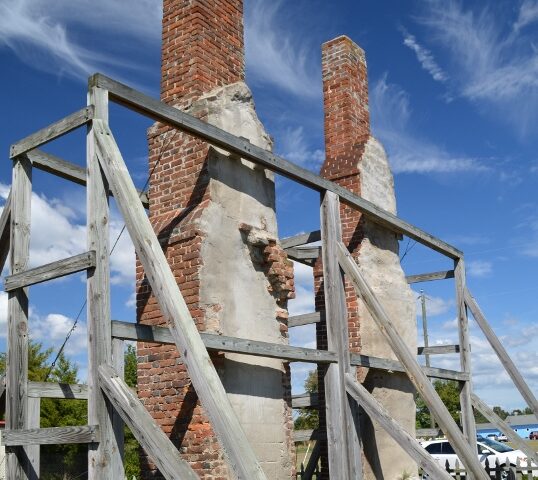 These chimneys are all that remain of the estate of Dorothy Roy. Roy was significant because she was the only woman to hold a franchise to operate a tobacco warehouse in the American Colonies. Her franchise was chartered by John Buckner in 1673 and then passed to John Roy, and upon his death, the franchise passed to Dorothy Roy. It was said that ships would dock at Port Royal, and the Port was the center of commerce, with Dorothy Roy at the center of it. In addition to the tobacco franchise, she owned a license to operate a tavern. It was said that Roy’s tavern was the primary spot in town where business happened.

Thomas Roy, Dorothy Roy’s son, had a reputation for underhanded business practices; and got in trouble with Crown authorities for a whole host of infractions: from illegal campaigning in elections to misdealings as Tobacco Inspector for Caroline County. The Crown Attorney ordered that a Magistrate investigate the matter and report his findings to the Council.

The scandal had repercussions that affected the Roy family and the Town of Port Royal. Upon Dorothy Roy’s death, the son that mired the family in the scandal, Thomas Roy, inherited his mother’s tavern. He then sold it to Benjamin Long. Her grandson sold the tobacco warehouse to James Miller, Port Royal merchant and Caroline County Magistrate. Today the chimneys to Roy’s estate are all that remain. 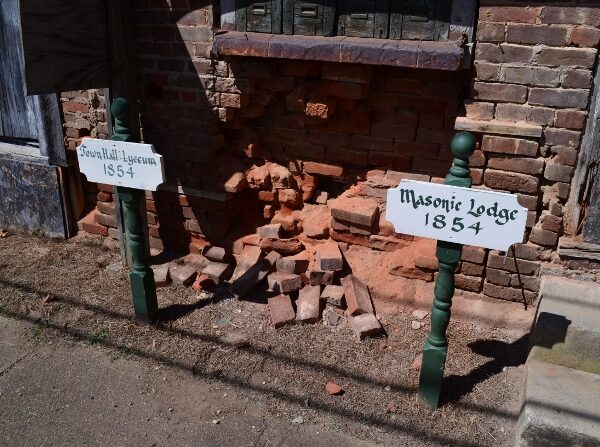 On June 1, 1851, 35 Port Royal Citizens agreed to subscribe 52 shares at $50 a share (a total of $2,700) for the construction of a new “Town Hall & Lyceum” behind Lot 20 on King St. Undergoing restoration, the brick two-storied structure, with cellar, still stands. All original documents pertaining to the construction of the building are still intact and comprise the only full documentation of any structure in Port Royal. The complete documentation means we know more about this building than any other building in town. 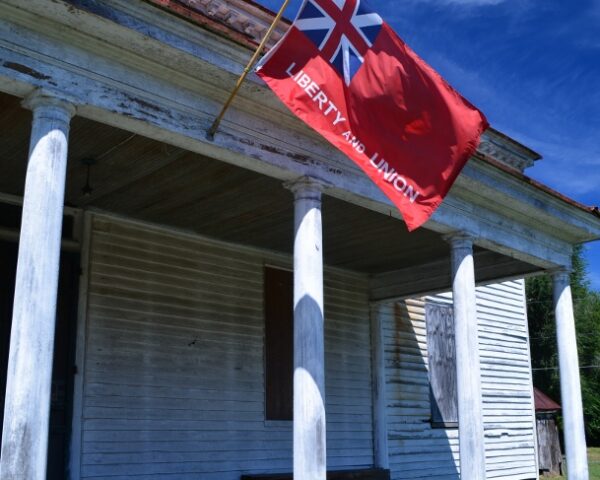 It was here on April 23, 1865, that five visitors rode up to the Peyton House. They were Private Willie Jett of Westmoreland County, Private A. R. Bainbridge, and his cousin Lieutenant Mortimer Bainbridge Ruggles both of Friedland, King George County– all Confederates. They were protecting John Wilkes Booth and his henchman Davie Herold. Sarah Peyton denied them refuge and they continued on to the Garrett Farm 3 miles west of town. It was at the Garrett Farm that Booth was eventually killed. 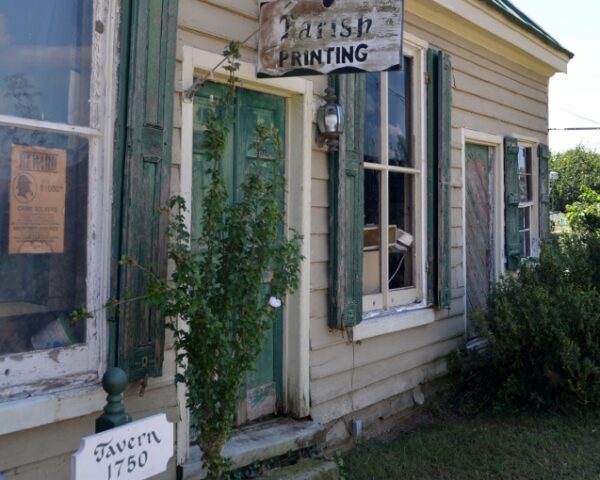 This 18th-century structure provides a rare perspective on commercial operations in Colonial America. This building was constructed as a purely commercial enterprise and was never intended to be lived-in as a residential dwelling. It is unique in that it was a commercial building and it has been preserved remarkably well, into the 21st Century. Most commercial structures from the 18th century have been lost, and in America as a whole, not many still stand. Seeing this, 18th Century commercial structure, preserved as well as it has been; is truly a special gift for Port Royal. 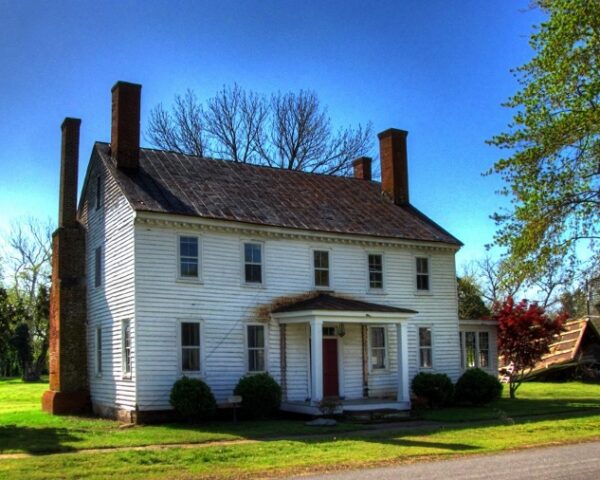 The history of Fox Tavern dates back to 1755 when William Fox secured a license to operate a tavern in his home, although the present dwelling dates from a little later in 1759. Fox’s expense ledger tells us that George Washington stayed here on three occasions. Lot 26 has taken a number of different names over the years, sometimes being called Powers’ House and at other times, Fox Tavern. When Captain Fox was away at sea as a master of sailing vessels, his wife Ann (Roy) Fox managed their tavern. 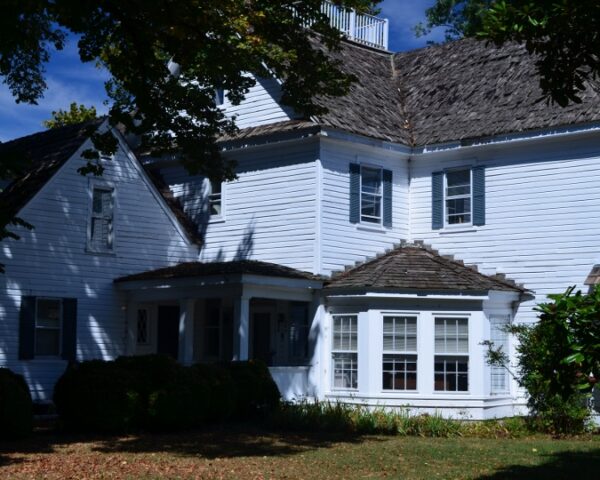 Named after Mary Timberlake Gravatt, Timberlake’s history was largely shaped by Dr. J. J. Gravatt. Dr. Gravatt had relatives, attendants, and people important to his medical practice living at Timberlake; in addition to his wife and five children. The enormous space requirements of his household meant that his estate needed 15 rooms, created as additions to the original structure. The structure that you see today is the result of that subsequent construction. 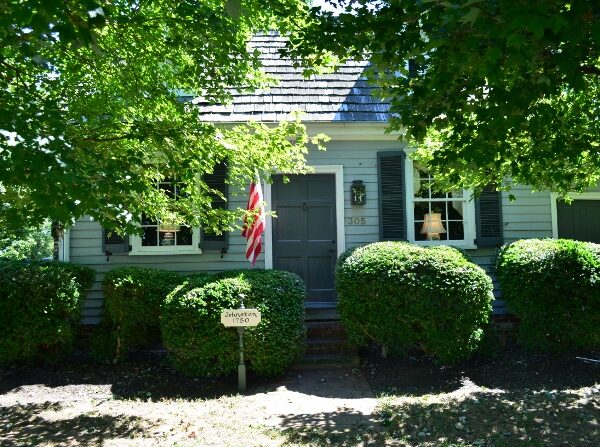 The home to a prosperous merchant, Robert Johnston, the house was built in 1750 and is one of the oldest surviving structures. It served as a post office for many years. 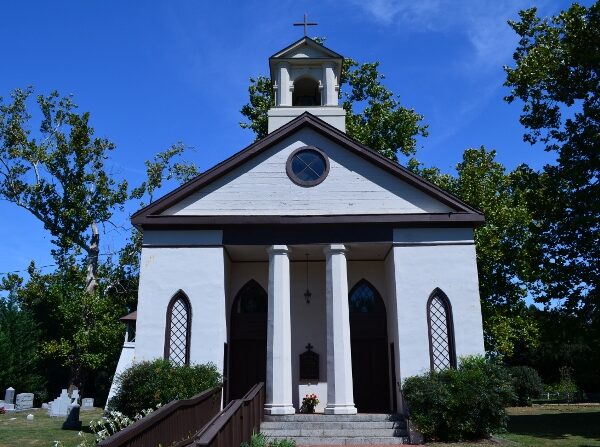 St. Peter’s Episcopal Church is the oldest congregation in the Town of Port Royal. Generations have come to worship at this church, along with some of the most influential townspeople in the Town’s storied history. If you go into the cemetery you’ll see the graves of some of the town’s leaders, dating from inception to the present 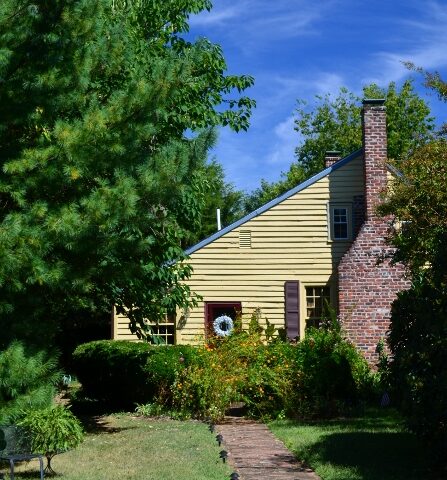 James Bowie is one of the town’s oldest surviving structure, dating to 1744.  Considered one of the most complete structures in Port Royal, it is an outstanding example of mid-1700’s era architecture.  As you view the structure, you’ll notice the sharp slant to the roof.  This was common on houses from its time, and is one of the ways in which the house tells how old it is.  Houses built after the mid-1700s don’t have the sharp slant to the roof that is shown here. 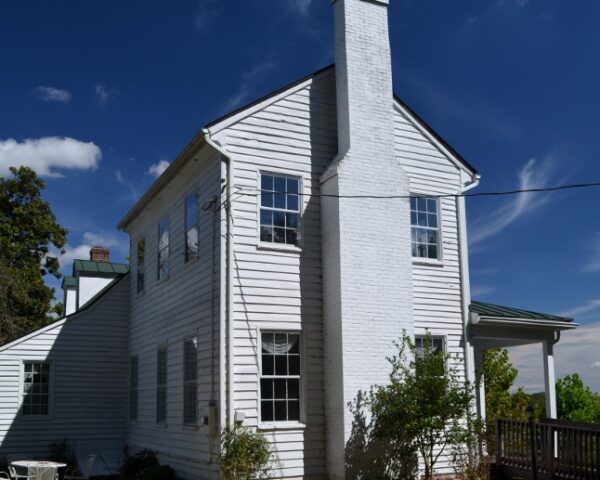 St. Peter’s Church Rectory is one of the oldest structures in Port Royal. It was built in two periods. The oldest section dates from 1740 – 1745, and the front section dates from 1840. The house is a frame, and the older section contains one and one-half stories with three dormers, made of mostly beaded weatherboarding. It also has a full bricked-in cellar (dating to about 1800). You’ll find hand-hewn beams with Roman numerals in formerly the parlor. The former entrance features three-paneled doors, showing the old wainscoting around the lower part of the walls. 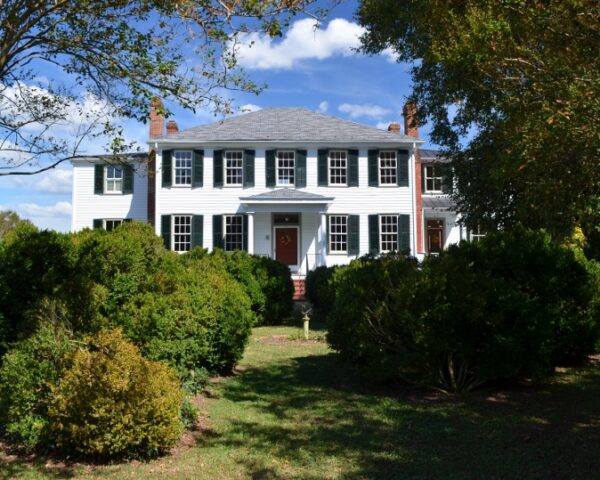 For many years called the Armstrong House, Riverview, erected here in 1846, is one of Port Royal’s most spacious homes. This two-story house with 9 room fronts on a series of long, steep, terraces leading down to the edge of the Rappahannock River, where formerly a grain warehouse stood for loading grain onto riverboats. One hundred yards out into the river are the remains of a wharf, built in the 19th century where the Lightfoot family moored its boat, the “P.D.Q”. Nearly all riverfront residents maintained wharves such as this a century ago. 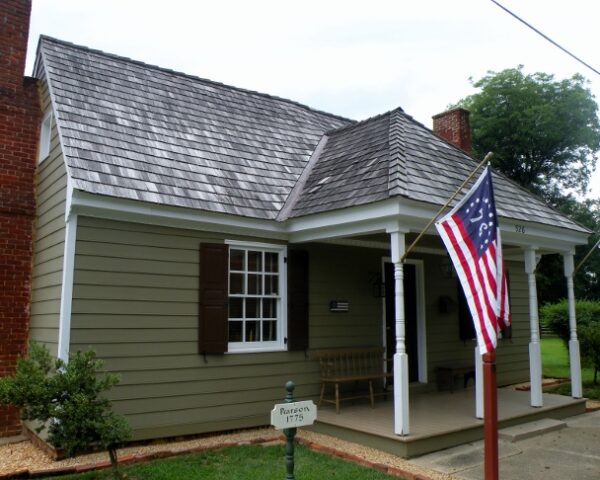 “Cummings”, (who may have been Phoebe Cummings) was the first owner here in 1787. The name on the title was shown as Pheby Cummings in 1800 and as Phoebe Cummings in 1804. The next owners in 1804 were John Pearson and Elizabeth Pearson, who lived here when the present dwelling was erected, circa 1818. 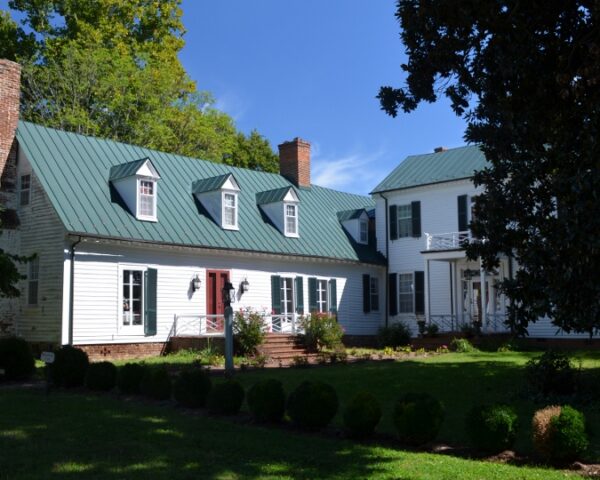 Built-in 1745 – 1750 and enlarged in 1790 and then again in 1837 when a wing was added. It was first owned by Robert Gilchrist, (who also owned Lots 1, 8, 15, and 22, and was a prominent founding father of the town). The property here acquired the name Townfield about 100 years later. Gilchrist owned at least 11 Lots in Port Royal, as well as outside of town. Before his death in 1790, Gilchrist added two additional sections to Townfield– his original house on Lot 8. 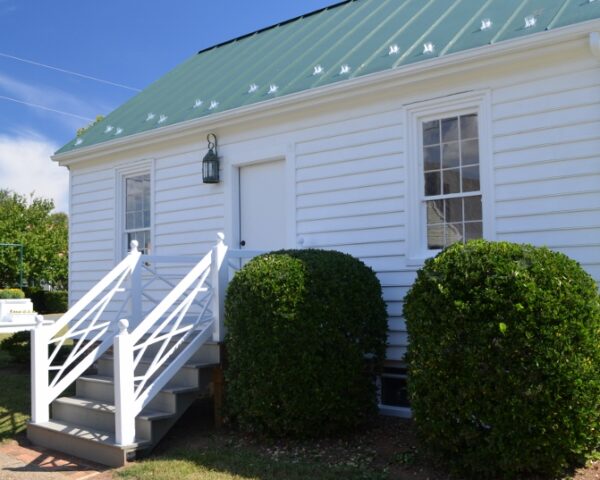 In January 2001, this historic doctor’s office building was donated to Historic Port Royal, Inc. by Mrs. Ned Stehl. The Caroline County Board of Supervisors, at their January 9, 2001 meeting approved the request from Historic Port Royal for funding in the amount of $20,000 to help with the cost of restoration. The restoration will result in a Visitor Center/Museum to greet visitors into the Town as well as Caroline County along the U.S. Route 301 corridor.